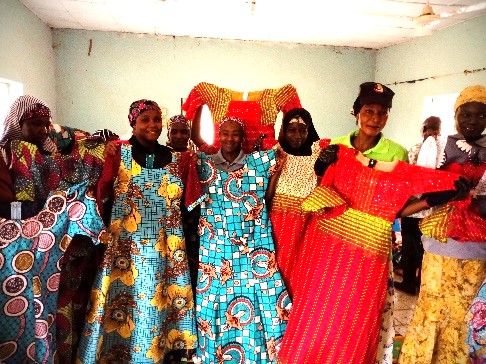 Bintu Mohammed, 28, and Zainab Saleh, 40, widows and members of the CJTF, tell pathetic tales of typical, hitherto happily married, housewives and mothers whose spouses were slayed by the insurgents, plunging them and their children into prolonged blistering hardships in an insurgency-ravaged and impoverished society where in-laws and relations virtually bear no burden of widows and orphans.

This appalling situation has partly been due to the raging impoverishment gnawing fast down to the foundations of societal norms and values, and partly due to the sheer lack of compassion on the part of whoever should be duty-bound to contribute to the upkeep of widows and orphans.

When their husbands were slayed by Boko Haram, Bintu and Zainab, utterly traumatized and vexed by these devastating bereavements, and fired by the need to at least mitigate the killings and restore peace and security, hastened to enlist in the CJTF.

They did so, as did their fellow female CJTF members, amidst the traumatizing situation of catering for their children, which could be likened to squeezing out a drop of water from stone. They, to this day, assist in searching for IEDs possibly strapped around female entrants into worship places, other public places and gatherings.

The golden opportunity for them to wade out of their hitherto seemingly endless hardships to a life of rediscovery and prosperity as honourable and respected ladies in the society came through the EU, MCN and British Council, and delivered by HCDI. They had never dreamt of the skills empowerment that would ascend them from their debasing lives of wretchedness to esteem and prosperity.
Heaving sighs of relief and satisfaction, each of the two widows excitingly tells the tale of her gradual re-emergence to hope and fulfilment as a skilful seamstress, empowered by the three months Tailoring and Fashion Design training offered her by EU, MCN and the British Council, facilitated by HCDI. Earning enough to cater for her and the children, each of them now vibrates with the satisfaction of emerging from penury and hopelessness to increasing comfort and future prosperity. 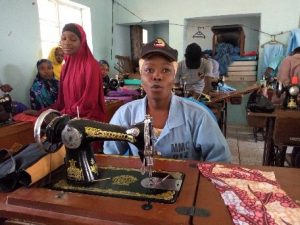 Bintu, now a mother of 4, comprising 3 girls and a boy, enlisted in Sector 9 of the CJTF at 24, after insurgents entered her marital home at Bulumkutu Ward of Maiduguri Metropolis, shot dead her husband and the eldest of her two male children, beheaded the husband and strapped the head to his chest. She was, therefore, a mother of 5 five years ago.
She joined the CJTF, as did majority of her fellow CJTF female members, with a mission, not necessarily for vengeance by killing insurgents, but to contribute to ensuring security at worship places, other public places and gatherings as well as the neighbourhoods of the community. As do, her fellow female members, therefore, she also searches female entrants into such places for IEDs, especially at El-Kanemi College of Islamic Theology. She used to cater for the children with paltry gifts of cash and very measly quantities of food items often shared with them by their male counterparts. Her pathetic situation was worsened by her resolve never to indulge in any form of promiscuity to meet her needs and those of the children.

It was, therefore, natural that she would grab, as she actually did, with utmost gratitude the golden opportunity offered her by MCN and the British Council, through HCDI, to transit from dejection to satisfaction. With the three months training she has acquired in Tailoring and Fashion Design, she now believes she is already ascending to the enviable status of a professional seamstress. 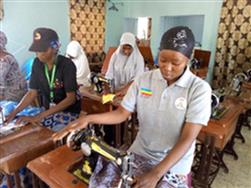 I now earn between N1,200 and N1,500 daily, working with established seamstresses. With my savings, I have been able to register for my National Diploma in Civil Engineering at Ramat Polytechnic. I now hope to sponsor myself for a degree in Civil Engineering. 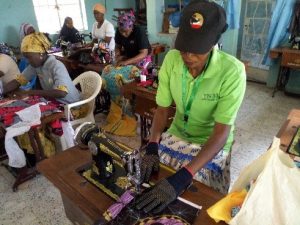 Zainab hails from Hong, Adamawa State. She is a mother of 6, comprising 4 boys and 2 girls. She enlisted in Sector 9 of the CJTF following the killing of her husband by the insurgents. He was returning from Kano, when insurgents shot him, among others, in their cruising vehicle. He died three days later at a hospital in Maiduguri.

“It would fascinate you to hear that with my savings from these, I cater for the family satisfactorily well according to my economic status, including paying the children’s school fees. I must say that nobody knows my problems now.”

Like Bintu, she joined the CJTF, not in search of vengeance by, herself, killing an insurgent or more, but in an effort to contribute her quota to achieving security against the deadly activities of the insurgents. Consequently, she, as do, her fellow female members, searches female entrants into worship and other public places and gatherings for IEDs. Zainab brandishes the credit of arresting, with her bare hands, a suicide bomber once with an IED strapped to her chest.
Catering for the family of 7, comprising herself and 6 children, with virtually no skill, no trade and no assistance from her in-laws in Maiduguri (her parents are in faraway Hong) is a pathetic story of a widow and mother of 7 completely left to her little toils by the entire society. While working with the CJTF, Zainab would only embroider a cap in about one month, and would sell it at between N1,500 and N2,000 as her main source of income for the upkeep of the family. 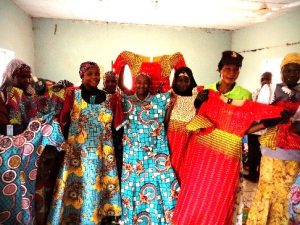 Zainab amidst other colleagues displaying their products

When, therefore, MCN and the British Council offered her three months Tailoring and Fashion Design training, facilitated by HCDI, she grabbed it with gratitude. She now believes she is fast progressing to a professional seamstress, a promising pedestal for her ascent to prosperity as an esteemed member of the society.

Even before acquiring the required toolkit to establish her own business, she now earns enough by using one of the two sewing machines owned by a neighbour to execute sewing jobs she collects from mothers and other ladies in her neighbourhood. In the absence of such jobs, she earns the minimum of N500 daily, assisting the neighbour in cutting and preparing pieces of cloth for sewing. The neighbour now pays her N300 even when there is no job to help with.