The rebirth of Idris alias Jaguar 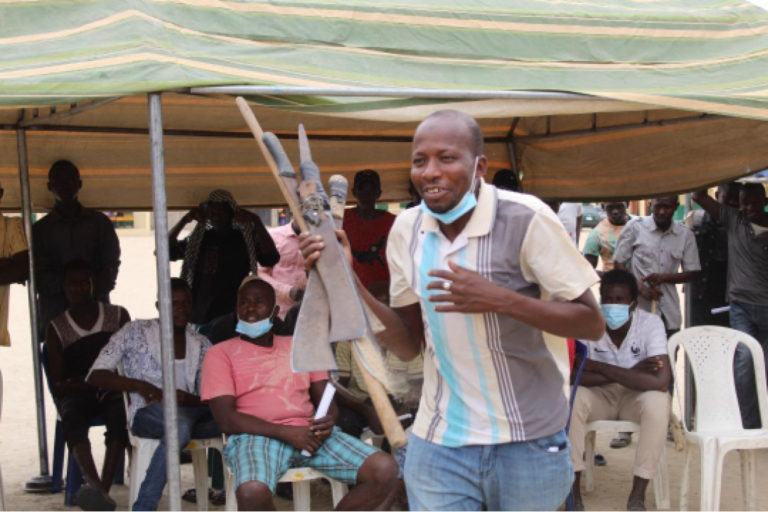 He exhibited the characteristics of a goon, but his voice expressed remorse and repentance, as he reeled out his reasons for renouncing violence for good.

Idris Usman, 35, grew up a thug, smiting whoever his instinct instructed him to with whatever weapon he wielded, minus the gun, in a given situation.

Idris was the boss of Dala/Yajuwa’s about 300 hooligans mostly employed as electioneering-campaign-time thugs, smiting political opponents to submission.

He has, renounced thuggery and is persuading his hundreds of goons in the two wards to abandon that path and return to life righteousness with him.

This rebirth is midwifed by the EU-funded, British Council-implemented Managing Conflict in Northern Nigeria (MCNN) through a local NGO, Herwa Community Development Initiative as facilitator and convener of Community Peace and Safety Partnership (CPSP) programmes.

This time, the programme is: Voluntary Disarmament of Violent Youths in Maiduguri metropolis and Jere.

Under this programme, armed youth groups have been surrendering their weapons to the law enforcement agents and renouncing violence.

Since there is the  possibility that such armed youth groups provide a reliable pool for recruitment by the sponsors of terror, the programme sought to nip that in the bud.

The disarmament wind first bellowed at Ngomari Airport of Jere on  May 21, 2020, where about 300 weapons-wielding hooligans, led by Muhammad Sani, surrendered their arms.

The partnership comprised the security and law enforcement agents, community leaders and the leaders of the youth groups.

“At the end of the meeting, the armed youths leader, Muhammad Sani, took up the task of persuading them to voluntarily disarm”, the Executive Director of Herwa Initiative, Mohammed Hassan Ngubdo, told Kanem Trust.

“The Ngomari Airport maiden disarmament at Ngomari 1 Primary School became historic because it ignited a raging interest across most of the armed groups in MMC, Jere and parts of Konduga Local Government Areas.

The armed youth groups at Hausari, Bulabulin, Moromti, Dala and Auno are now disarming,” he said.

The programme aims at drying up the pool of armed youths employable for thuggery and also exhibiting high recruitment potentials for insurgency and terror groups.

“We grew up doing whatever we wanted. We maimed and inflicted severe wounds on our victims, “ Idris, alias Jaguar, the boss of the Dalia/Yajuwa group consisting of about 300 youths told Kanem Trust.

“We then saw on the social media that Ngomari youths were disarming. We went to our District Head to express our interest to follow suit.
“We have resolved to surrender our arms, and I am persuading all my members to renounce thuggery.”

“I will ensure that henceforth no politician makes us carry arms; we want to see a safe, violent-free community.”

The youths however raised fears of stigmatisation among their communities as well as blacklisting by the police, who may mark them for arrest any time violence is committed in their wards, even if they are innocent.
“We will address all these fears with the relevant authorities.”

“Whenever possible, we move to disarm youths to achieve these.”