Home » Stories » Now we’ll have a life after Boko Haram

Now we’ll have a life after Boko Haram 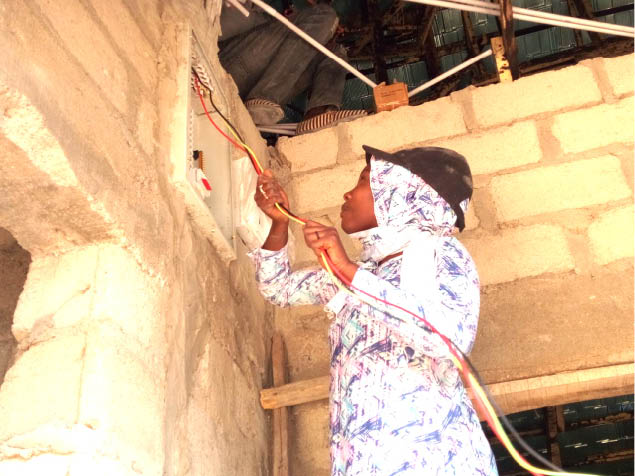 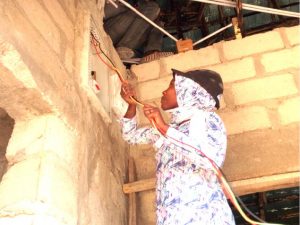 Zara Mohammed, a CJTF member is learning to be an electrician and thinks being female will play to her advantage

There has always been fears that the thousands of youths in the Civilian Joint Task Force (CJTF) helping in fighting Boko Haram may become a security threat of their own. But already, efforts are being made to forestall this, as our correspondent writes.

Zara Mohammed Lawan, 25, stands on a high rung of a ladder, pulling electric cables out of a network of pipes running within the walls.

She entwines the cables to fit well into the switchboard to facilitate safe installation of electricity in the house. She is encroaching into a male dominated field, but this won’t be the first time Zara is doing that. She had been a member of the famed vigilante known as Civilian Joint Task Force that has been helping fight Boko Haram. Realizing that the war will one day come to an end, Zara is preparing for life after Boko Haram

Manipulating the cables, she radiates pride and self-confidence in the niche she sculpts for herself.

Zara is a trained civil engineer holding a National Diploma in the field from Ramat Polytechnic, Maiduguri. She is also among the 408 CJTF beneficiaries of various skills acquisition training in Borno State, funded by the European Union (EU) and conducted by the British Council through a local NGO, Yerwa Community Development Initiative.

Her choice of learning electrical installation is unusual considering that most women would not venture into the field.

The CJTF, formed in 2013 to help the Military Joint Task Force in the fight against Boko Haram insurgency, is a 10-sector 25,000-member organization in Borno State, administered by the state government under the Office of a senior special assistant to the Governor. Its membership drew people generally scorned, justifiably or otherwise, as goons, miscreants, vagabonds and whores. A substantial number enlisted after dropping their various trades to rid the society of Boko Haram. A good number of them have lost loved ones to the terror.

With complaints of the stipend government pays them not being enough to cater for basic needs, while a large number are not even entitled to the stipend, there is a real fear that the members may become a menace to society if not given adequate skills training, since they are already used to handling weapons, and have experienced battles alongside combatants in joint military operations.

These seed beneficiaries of this three-month long training which commenced in December are acquiring skills in electrical installation, carpentry and cabinet making, fashion design and tailoring, welding technology, leather and shoe making, hairdressing, confectioneries making as well as perfume, liquid soap, room fresheners and disinfectant making. Zara serves CTJF sector 4, as a human detector of Improvised Explosive Devices at gatherings. “My fellow female members shied away from the electrical installation training, but I ventured into it not just to broaden my knowledge of engineering, but because of the dazzling prospects,” she said.

“Because it is unheard of that a woman can be an electrician, I have already begun attracting admiration in our neighbourhood. Over the two and a half months, I have acquired sufficient skills, I am already being invited into households to fix some minor electrical problems. It would surprise you to hear that I even handle live electricity wires as NEPA electricians do.”

Being a female and an electrician has many advantages, as she points out. “Because of the Islamic tradition of Purdah, which bans men from entering matrimonial houses except on necessity, I will in future be readily available as a woman to enter households and carry out electrical repairs.” Zara wishes to be seen as a model for women within and outside the CJTF on breaking the mould.

“I wish to remain with the CJTF to help maintain peace and security in my community,” Zara said. In the case of Musa Mohammed, 39, he has chosen to learn carpentry and has been attached to a workshop alongside 49 other members of the CJTF. “I did not have any consequential skills before joining the CJTF,” Musa said. “The bitter truth is that with our experience in the use of weapons and having no livelihood skills to cater for our families, people like me, married with five children, will be tempted to engage in criminality in future. His decision is already paying dividends.

“Even while on training, whenever we close from shop, many of us are often called upon for some paid carpentry works in their neighbourhood from which they earn N2,000 to N3,000, sometimes even N5,000. This is not bad, so you can see, this is a trade one can build his livelihood on,” he said. Musa Ibrahim Modu, 22, a school dropout in Sector 8, thinks the CJTF are already becoming a nuisance in certain areas. “In fact, a few of us are already engaging in crimes by imposing unnecessary taxes on people along the roads,” he said.

Acquiring shoemaking skills at a shop, the trainee-cobbler admits, “So, we are not just acquiring livelihood skills, we are undergoing significant character transformation.” Zainab Saleh, 40, mother of 6, from CJTF Sector 9 is among the 105 acquiring tailoring skills. “My husband was killed by the insurgents, and since then, it has been very tough for me catering for and training the children. In such a situation, you cannot rule out the possibility of one engaging in crimes and depravities without any livelihood skills to discharge responsibilities,” she said.

Usman Kachalla, 40, married with 7 children is from Sector 4. “Without livelihood skills and self-employment, many of us now stand by the roadside, begging for alms ranging from N50 to N200 from motorists or commuters to cater for our families,” he said. But already from his little earning even as a trainee, he is confident of a better future when he sets up his own business. “I now realise between N700 and N1,000 daily from minor repairs I carry out in our neighborhood when we close from training. This is higher and more honourable than the N50 to N200 alms I collect from motorists,” he said.

Mohammed Hassan Ngubdo, the Executive Director of Herwa Community Development Initiative, says the initiative still has a long way to go to eat up the numbers. “As a starting point, the EU has only been able to cut 408 of the CJTF members out of 25,000 for the training, paying each of the beneficiaries a monthly N5,000 stipend for three months, as the master craftsmen training them get N50,000 monthly each,” he said.

He urged the seed beneficiaries to train their fellow CJTF members when they establish their businesses. The initiative has been lauded, especially by the government of the state. A senior special assistant to the governor on CJTF, Barr Jibril Tela Gunda, said, “We are most grateful to the EU, the British Council and Herwa Community Development Initiative for the training. We have always been deeply worried how to get these youths to acquire empowerment skills to earn livelihoods so that they don’t become criminals.

I would implore other development organizations and stakeholders to help us train these youth for livelihood.” For the likes of Zara pulling wires and connecting them, she hopes to spark a change in her personal future, and that of her home state. And just maybe the light she will install may shine the path for other.