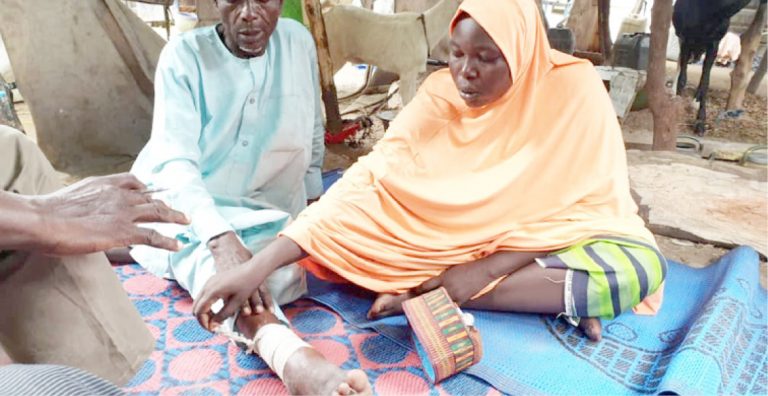 Falmata, with her husband, Bulama Umar

The stigma experienced by persons suspected of being Boko Haram insurgents, resulting in their inability to get reintegrated with their home communities and relations, is constituting a cause of intense trauma to those persons.

Falmata Bulama Umar, alias Yakarama, 30, a mother of 10 and a foster mother of 20 children, 10 out of whom have now been reintegrated with their parents, is one of such persons.

For seven years now, she has been disowned by her parents and relations for rescuing her husband, who they suspect of being a Boko Haram insurgent, from the captivity of Boko Haram.

Her elder brother, said to be a member of the civilian CJTF (name withheld) at Banki, is said to have even threatened to kill her.

Kanem Trust traced her to her shelter at the vast Government Science Secondary School, Bama IDPs camp, and heard her story.

When Boko Haram captured Wajere in 2012, they targeted to capture me for whatever reason known to them, but unknown to me to this day.

“When my husband and I still had ample opportunity to flee, amidst the very frightening situation, I pleaded with him that we should flee, but he would not heed, arguing that as a community leader, he would not abandon his people at the time they needed him among them.

I therefore, fled alone, and crossed the border to my hometown, Modube, to find refuge with my parents. I proceeded to Yaoundé from there.

News came to me that my husband had been taken into captivity by the insurgents, who reprimanded him for sending me, his wife, to safety. I then swore to return to rescue him.

When I told my parents of my plan, they vehemently kicked against it, threatening that they would disown me of I insisted on doing so because they believe he is an insurgent, querying why I should rescue an insurgent who kills people.

Insisting on rescuing Bulama after failing to convince them of his complete innocence from anything in Boko Haram, explaining to them that life would be completely meaningless to me without him.

I left in earnest for Wajere; they disowned me and my elder brother, a civilian CJTF member at Banki, threatened to kill me on sight, staunchly believing that I am Boko Haram for rescuing my ‘Boko Haram’ husband.

On my return to Wajere, I immediately launched my search into the forest in the surrounding region for the location of my husband’s whereabouts, wandering in the forest for about two weeks, until I found the location.

Powered by the strongest determination I have ever experienced in my life, I sneaked in and rescued him (she would not say how she achieved the feat).

I strapped him on my back and wandered for three days in the forest, because he was sick due intense torture by the insurgents.

We wandered for about two weeks in the forest until we arrived at Banki where I approached troops there and told them our story. They were convinced and sympathised with us. They then brought us here to Bama.

However, before leaving Banki I called my parents to inform them that I had successfully rescued Bulama but they insisted that they had disowned me for rescuing an insurgent.

Now I dare not go near my hometown and relations due to my brother’s threat to kill me,’’ she said sobbing.

She wondered why she could not be allowed to reintegrate into the family along with her husband.

So many persons suspected of being Boko Haram have been cleared and now fully reintegrated with their relations, why not me?’’

Due to intense trauma over my people disowning me and my inability to get reintegrated with them, sometimes ago I was even vomiting blood; I am now still on drugs to assuage the trauma, but I still can’t sleep, although I have my husband beside me.’

She said her next priority is to be with her family having rescued her husband.

Speaking with Kanem Trust Bulama Umar, 75, said he regards Falmata as his mother not a wife.

I regard her as my mother, not a wife, “Any woman who does this to her husband is more than a wife; she rescued me from a place where I initially thought I would be killed.

I don’t want anything to harm Falmata; her parents and relations disowned her because of me.

Apart from my N1.2 million and motorbike the insurgents dispossessed me of, they also carted away all her belongings which I can value at about N500,000.

I am appealing to government to wade into the matter and facilitate her reintegration with her parents and relations, Bulama Umar said.

Falmata is now being assisted by Herwa Community Development Initiative, who launched moves to reintegrate her with her parents and relations.

We are working towards her reintegration, Mohammed Hassan Ngubdo, the Executive Director of Herwa Community Development Initiative, told Kanem Trust.

IOM has been facilitating this since 2018; it is not as easy as you think; but rest assured we will succeed, Ngubdo said.

5 thoughts on “Falmata, disowned by parents for rescuing husband from B/Haram”