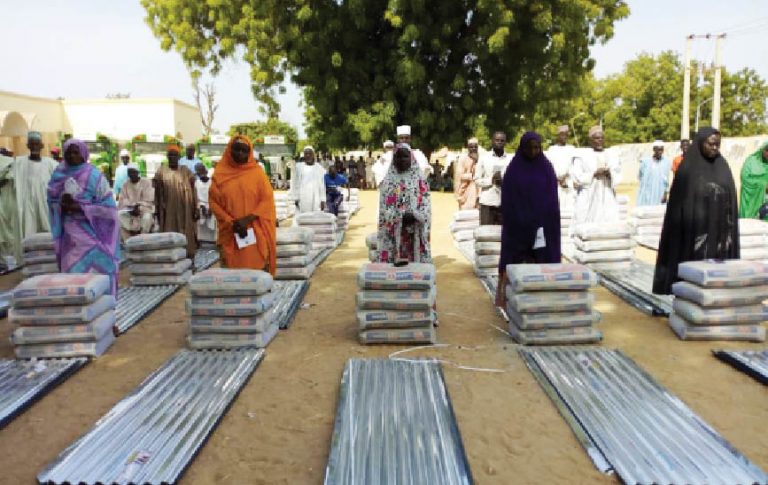 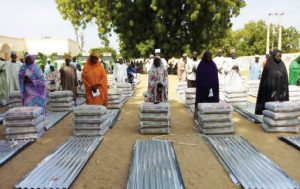 Some of the beneficiaries with their building materials

The European Union (EU) and the United Nations Development Programme (UNDP) has assisted 3000 returnee-IDPs in Bama to rebuild their homes.

The project was facilitated for the two bodies by a Maiduguri-based NGO, Herwa Community Development Initiative (HCDI), under the cash-for-work programme of assisting IDPs to rebuild their lives.

Each head of a returnee IDPs household received four bags of cement, two bundles of corrugated iron sheets and N40,000 cash for the project.

“The level of devastation impacted by Boko Haram in Bama was so huge”, Mohammed Hassan Ngubdo, the Executive Director HCDI, told Kanem Trust, explaining, “most of the houses in Bama cannot be rebuilt.”

“The level of devastation impacted by Boko Haram in Bama was so huge”, Mohammed Hassan Ngubdo, the Executive Director HCDI, told Kanem Trust, explaining, “most of the houses in Bama cannot be rebuilt.”

Ngubdo said the 3000 beneficiaries, divided into two wards in the town – Bololo community (1500) and Kitikasamma/New York (1500), were women, widows, child-headed households, the aged and other vulnerable individuals.

“While each of the Bololo community beneficiaries have received their N40,000 cash component of the assistance complete, their Kirikasamma/New York counterparts have do far received N20,000,” the HCDI boss said, explaining, “we await the balance to be paid to them as soon as it is disbursed to us”.

“Before the EU/UNDP intervention, the benefitting IDPs, whose houses were devastated beyond their ability to do anything about, were yearning to return and settle in their personal houses, not IDP camps, but lacked the wherewithal to rebuild the houses and immediately they received those materials and cash  they started doing so.

“This method of assisting IDPs to help themselves impacted so positively well. It relieved the beneficiaries of their hardship on the part of homes to return to,” he observed.