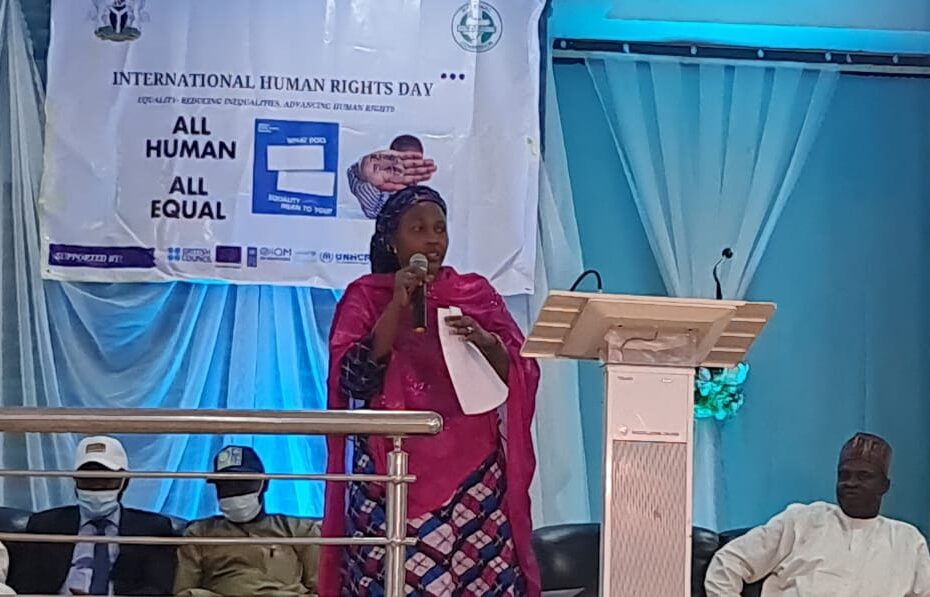 Communities of Jere LGA have experienced strange ordeals as young people killed their parents and fellow brethren just because they failed to succumb to teaching and doctrines of the Boko haram school of thought. After the mop off by CJTF; Peace has been restored, all activities become operative; however, the Jere community has some complex issues to be addressed, especially perpetrators of violence and other social and security issues in the community.

The former fighters are surrendering to the Nigerian military in mass, more than 1000 Boko haram fighters and their families have handed themselves over to the army unit for reintegration. In staged ceremonies troops organized to the group of Men holding a placard in English “Nigerians please forgive us” “peace is the only way out” “surrender and live peacefully.

Herwa Community Development Initiative Programme Coordinator Kaltum Satomi in her opening remarks highlighted the importance of reintegration in the community, adding that Jere and the entire state have already suffered from the menace of the Boko haram, for us to build our resilience and overcome the fatigue experienced, reintegration and general acceptance of this group is the only way out.

She re-emphasized and urged Traditional leaders, Religious leaders, Security personnel and key community influential leaders to encourage their members to accept former members of violent extremists who demobilize from conflict and begin the process of reintegration back into the community.  Therefore, Herwa CDI is anxious to see a shift towards a change in perception on social norms related to community support for the reintegration of former Boko Haram members.

A traditional titleholder in the community where Boko Haram originated, reported that “I have seen a lot of atrocities committed by the violent group, but the question is; for how long can we afford to continue to live like that, the only option is to accept them back and live in peace.  Although there are many barriers, among them is the anger community members felt towards former Boko haram members and fear that former members still maintain their ties and ideological allegiances to the group. My final words are; whether is a former farmer or fighter provided they are going to lay down their arms, we are ready to accept them back to the community for peace to reign”.

when I heard the topic of discussion was about the reintegration of ex-combatant by partners and State Government, the mental and emotional stress within my system has melted away. I am disclosing this information because I have seen the effort of the government and partners in restoring peace in the state. As a road transport worker, I often met with the insurgents either on my way coming or going to transport passengers to other locality. The Boko haram asked us if the government and community members are truly ready to accept them when we surrender. The insurgents themselves are fatigued by the unending violence been perpetrated. They admire settling with their family in the community. I am tasking every stakeholder to enlighten their community members to unite and restore peace for the betterment of our state.

A testimony from a government official

As a community member I have witnessed a lot of testimonies from the insurgents themselves and the community members. The boredom people bears because of the crisis is quite stressful. Access to land is denied, continues deterioration of education sector, wastage of human capital and collapsing of socio-economic activity in the state.  The former ad latter are ready to embrace peace in the community. But the reintegration process requires strategic planning. From the awkward predicament, the community found themselves some may seek to take revenge. To control the fear of retribution, the government should put some measures like camping the former fighters elsewhere for at least two to three years, so that community members could be satisfied if the fighter has truly repented. Afterwards, the full reintegration comes easily.

Government and development partners are advised to avoid coercion in the process of reintegration, community members are yet to be fully stabilized and calmed. Whatever strategy explored for the reintegration programme should be implemented with diplomacy.

Development partners and government to intensify reconstruction and resettlement efforts to control the tension of victims of insurgency.