Case Story of Ibrahim Mohammed; a beneficiary of the MCN British Council/EU project 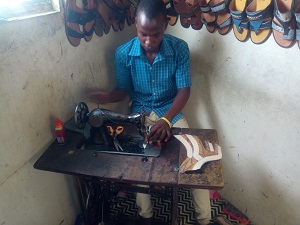 Overview
This case story is about Ibrahim Mohammed; a beneficiary of the MCN British Council/EU project implemented by Herwa Community Development Initiative. The success of the project can also encourage other stakeholders e.g. Government, Private sector and Donors to take on similar empowerment initiatives in Borno State and elsewhere. The story is written as a proof of impact of the project tagged CJTF Empowerment jointly implemented by State Agency for Mass Education Borno State (SAME) and Sani Special Shoes Maiduguri.

Background
The youth Vigilante group called Civilian Joint Task Force (CJTF) has contributed immensely to the sacking of Boko Haram from the City of Maiduguri around the year 2009. Their intervention is still seen as key to the successful conclusion of the fight against Insurgency in the North East Region and Borno State in particular. Spurred by their success in this regard, the CJTF have begun to agitate for a welfare package as a compensation for their contribution to the fight against insurgency. Threats have emanated from the CJTF that if nothing is done, they may resort to taking actions including violent means to force the state to compensate them.

Action Taken
British Council/MCN conscious of the above threat, decided to build the capacities of 350 members of the CJTF to forestall the actualisation of the threat. Six skill areas i.e. Fashion Design, Welding and fabrication, Electrical Installation, Hair Dressing, Leather and Shoe Making, Carpentry and cabinet making were selected by the Beneficiaries themselves during a series of meetings.

Thereafter, the beneficiaries were selected from the 10 sectors of the CJTF structure with the sectors commanders, CJTF leadership and Herwa Project staff participating and moderating the process. Gender representation was prioritised to carry on board female CJTF members and widows of fallen CJTF activists. The key actors that proved critical to the solution were State Agency for Mass Education, Aurasuri Metal Construction, Alid Construction, Idris Bumba Furniture Company, Sani Special Shoes and ……

Results
‘’As a result of this new skill that I have learnt, I am now respected in my community to the extent that some of my colleagues are looking up to me as a role model and are seeking for guidance on how they too can acquire such shoe making skills.”
“Other people have begun to see the potentials of the skills I have learnt to the extent that, a civil servant in Damaturu has proposed to partner with me to mass produce shoes and sell during the Ramadan/sallah period because shoes are in high demand.” 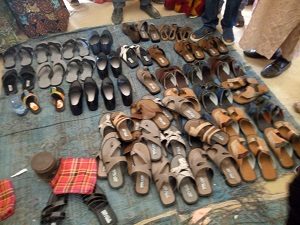 “If I were not trained, I would have no option than to follow bad friends to cause trouble and probably abuse drugs… fortunately, this training has engaged me and made me what I am today. I see a brighter future for me, I belief I will be a useful citizen of Nigeria.”

Conclusions
The project has brought out the CJTF members and positioned them in the business environment as compared with the previous perception of the people as touts with no future ambitions.
Considering the number of CJTF members in the State, no more than 5% were opportuned to be trained in the six skill areas. This mean that more CJTF members need to be trained in other to reduce the level and significance of the threat of violence, drug abuse and youth restiveness. 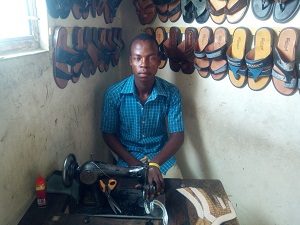 ” I see a brighter future for me, I belief I will be a useful citizen of Nigeria”
Mohammed Goni

2 thoughts on “Case Story of Ibrahim Mohammed; a beneficiary of the MCN British Council/EU project”